THE EVOLUTION OF VIDEO SURVEILLANCE: CCTV TO MICRO CAMERAS AND DRONES

Security professionals have been using closed-circuit television systems to keep businesses safe from harm since the 1950s, yet the methodology of recording didn’t change dramatically until the last ten years. From its humble beginnings monitoring royalty in Trafalgar Square in England to the micro-sized cameras and drones of today, see how video surveillance has changed over the years.

George Orwell debuted the concept in his forward-thinking book “1984” back in 1949, but miniature movie cameras were first used in spying as a tool for covert surveillance before 1940. However, it wasn’t until 1951 that the first live images were captured on a television camera via a video tape recorder. Law enforcement began using this revolutionary new tool in the mid-1960s for public places, while NASA found ways to harness the new technology to map the lunar surface and return those graphics to Earth.

While previously a bastion of governments, closed-circuit television began to be used extensively by banks and other financial institutions as a measure against theft in the 1970s. The evolution continued as microchip technology shrank the size of cameras and expanded the ability to record for long periods of time. Companies find great value in the ability to capture criminal acts on tape, while simply having a camera in plain sight is considered a deterrent from unlawful acts. ATMs are a key target for theft, but the installation of video surveillance options helps keep them more secure. Finally, so-called “Nanny Cams” provide a way for parents to keep watch on children, pets and yes, nannies.

The technology driving surveillance devices continue to grow at a rapid pace, with new acceptance from the public sector coming after the 2001 World Trade Center attack. Schools and police departments begin using facial recognition software to track down missing children or criminals, while city-wide searches of surveillance systems allow law enforcement to more quickly target problems. Video surveillance today is fueled by the internet, with an abundance of options for both business-based and personal protection.

Drones become more commonplace as components are miniaturized, and internet connectivity continues to drop in price with the improved quality of the connection. It’s not unusual for a large organization to have thousands of linked video systems, with near-unlimited data storage capabilities and tech that allows security professionals immediate and remote access to their data. Wearable gadgets such as watches and those built into clothing abound, while even chemical and thermal sensing surveillance are on the near horizon. Resolution and frame rate will continue to improve dramatically, while costs will become more reasonable.

See how modern surveillance options can benefit your business by calling The Flying Locksmiths today at 1-800-649-5397. We specialize in key card access, exit devices, door closers, and much more, and we will work with you to keep your business secure. 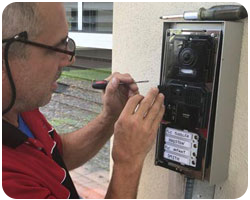