Leverset handles are a great option if you know your door is going to be used frequently and in a variety of situations. If you are going to be using the door to carry things in or out with your hands full for example, a leverset will allow you to open the door without having to use a hand to turn a knob. Or, if you are looking to be more ADA compliant, a good leverset on your facility will help ensure that anyone who has difficulty with a door knob will be able to enter and exit freely and without the need for help. The trained and experienced team at The Flying Locksmiths are proud to be able to offer leverset installation and leverset repair services to all of our commercial clients. Get in touch with us today to learn more about how we can help!

MAKING THE GRADE
Commercial leversets or “lever handles” are much more durable and vastly superior than residential grade locks. Unfortunately, they sometimes are lumped into the same category when in actuality they are worlds apart in terms of testing and durability. Most of the hardware you will find at a local hardware store is residential grade, meaning that the testing it goes through is far less arduous than a commercial grade lever – which makes sense. A leverset on the door between your kitchen and garage is going to get far less use than a leverset that is used on the bathroom in an office building. One is used a couple times a day and the other is used hundreds of times a day! Most commercial locks are made with a heavy duty cylindrical chassis, but there are lighter and heavier duty versions. Light duty versions have a standard tubular chassis, and heavy duty mortise locks. There are several kinds of commercial lever sets: keyed entry levers, privacy levers, passage levers, dummy levers, electronic levers, classroom levers, storeroom levers, dormitory levers, vestibule levers, corridor levers and asylum levers all of which have specific applications and our Physical Security Specialists can assist with identifying which is the right solution for your door.

ADA COMPLIANT
The Americans with Disabilities Act (ADA) is a civil rights law that prohibits discrimination against individuals with disabilities in all areas of public life, including jobs, schools, transportation, and all public and private places that are open to the general public. The purpose of the law is to make sure that people with disabilities have the same rights and opportunities as everyone else. Leversets play an important part in ensuring that your commercial doors are ADA Compliant. The code requires that any operable part have a shape that is easy to grasp with one hand without requiring tight grasping or twisting of the wrist to operate.  This has been changed to an advisory in the 2010 code, however, it would be prudent not to use not to use traditional door knobs and always use a commercial grade lever sets. Your friends at The Flying Locksmiths are here to help ensure your doors comply with ADA codes.

When you need lock and key services for your home or business, turn to the experienced team at The Flying Locksmiths! Our Commercial Locksmiths and Door Security System Specialists can recommend the best solution for your needs from our comprehensive suite of services ranging from high-security locks and keys to rekeying and emergency lockout response. Our company has been in the locksmith business for over 70 years and uses only the most trained, vetted, and professional technicians. Learn more about our lock and key services below. 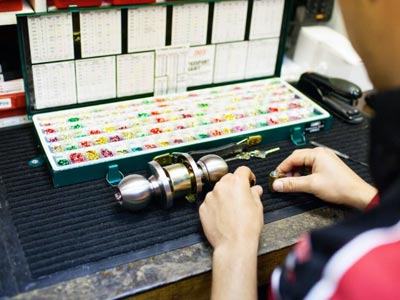 REKEYING
SERVICES
VIEW ALL OF OUR LOCKS & KEYS SERVICES